The Naughtiest Kid in Daycare

I couldn't believe my own child was the naughtiest kid in daycare.

When I stepped back and analyzed the situation, I realized that my son didn’t just become a naughty child overnight. It was actually the only way he knew how to let me know he missed the attention he was used to getting from me.

Imagine how hard it is for your child to instantly have to share you with other children. If your business is like the average in-home childcare business, you have children coming into your home by 7:00 a.m. and staying until at least 6:00 p.m. That’s a long, long time for your child to be sharing mom.

Once I Realized Why My Son Was Acting Out...


Return to Top of Page


I Did Set Up Some Ground Rules

I let him know exactly how I expected him to act when a daycare parent was picking up or dropping off a child or if I was conducting an interview with a prospective client.

To Help My Children Deal With the Invasion of Their Space, I:

Once I took these measures, my son was no longer the naughtiest kid in daycare. It was, however, a constant battle to prevent resentment for having so many children in the house.

As My Kids Got Older 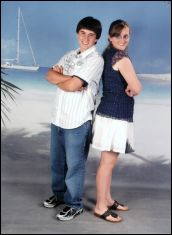 When my children became teenagers, it took a different kind of effort to make sure they didn’t resent daycare in their home.

The bottom line is, if your own child is the naughtiest kid in daycare, chances are it's their way of asking for some of your attention. Find a way to give it to them.


Return to Top of Naughtiest Kid in Daycare


Want to Look Around Some More?...

Exit Naughtiest Kid in Daycare and Return to Providers Page