It's always fun cooking different recipes for the holidays, but it's not always easy coming up with recipes the kids will actually enjoy. I've compiled some Thanksgiving Recipes for Kids that they're sure to enjoy!

When I cook for the daycare kids around the holiday, I don't like making the classic recipes of turkey, mashed potatoes and pumpkin pie. Those should be enjoyed on the special day with their family. I try alternative recipes, like this pumpkin dessert. It's a bit extensive so you shouldn't attempt to make it during daycare. 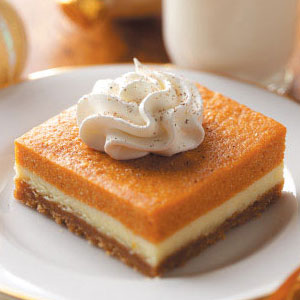 In a small bowl, combine the graham cracker crumbs, 1/3 cup sugar, and the melted butter. Mix well. Press into a 13 x 9" baking pan.

In a separate bowl, combine the cream cheese and 2/3 cup sugar. Beat with a mixer until smooth. Beat in the eggs just until blended. Pour over the graham cracker crust. Bake for 20-25 minutes. Let cool.

Separate the remaining 3 eggs. In a large saucepan, combine the egg yolks, pumpkin, brown sugar, milk, salt and cinnamon. Cook and stir over low heat for 10 to 12 minutes, until thickened. Remove from heat.

In a small saucepan, pour the cold water and add the gelatin. Let stand for one minute and then cook over low heat until the gelatin powder is dissolved. Stir into the pumpkin mixture.

In another large saucepan, combine the egg whites and 1/3 cup sugar.  Beat with a portable mixer for one minute. Continue to beat and place on low heat for 12 minutes. Remove from the heat and beat mixture until glossy peaks form and sugar is dissolved. Fold into the pumpkin mixture and spread evenly over the cream cheese later. Cover and refrigerator until chilled and firm.

Top with Cool Whip and serve.

Spread cheese onto the crackers. Place to resemble turkey tracks.

Start with a frosted cupcake. Insert a Nutter Butter cookie into the center of a cupcake to form the turkey's body.

Cut the fruit leather into 3" strips. Lay one piece down and place a toothpick vertically along the strip. Place a second strip on top and stick together. Fringe the edges with a kitchen scissors. Insert into the cupcake behind the body shape.