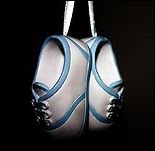 At What Age Should My Child...

The average child will begin crawling around 8-9 months. They usually start with the “army crawl” where they scoot on their bellies. After a couple of weeks of that, they will get up on all fours for the traditional “baby crawl.”

Children tend to start pulling themselves up on furniture around the age of 10 months. Walking on their own happens at around 12 months.

Most children will start babbling as early as 4 months. Words that only the most significant people in their life will understand will start forming at around 12-15 months. Audible words will start being used around 15 – 18 months. By the age of 2, they may be stringing a few words together. At 2-1/2 years old, they could be speaking in short sentences.

…Hold their own bottle?

Babies will start helping you hold the bottle at 8 – 9 months. They will be able to hold their own bottle at around 10 months.

…Give up the bottle?

Any time after one year of age. The sooner you break the habit, the easier it is for your child. At age one, switch them to a sippy cup with a soft tip. When they learn to drink from this cup, change it out for a sippy cup with a hard over and air-release value. At about the age of three, they should be ready for a normal cup that they can hang on to with two hands. 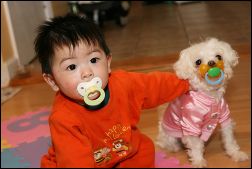 Some time between the age of one and two. Again, the sooner you break the habit, the easier it is for your child.

This habit is a little harder to break than the pacifier habit. You can throw away pacifiers, but you can’t throw away a thumb. You want your child to quit sucking their thumb at around the age of two.

…Cut down to one nap?

You have to read your baby’s mood, but sometime between 12 and 18 months is the normal time to cut down to one nap.

Return to Top of Developmental Milestones

…Say the ABC’s and know colors and shapes?

Right around the age of one, you should be able to cut normal table food into small bite-sized pieces and expect the child to be able to pick it up and feed themselves.

…Switch from a crib to a regular bed?

If there are no other factors involved, a child should be moved to a bed around the age of two. But sometimes there are circumstances, such as a new baby coming that forces the change earlier. That is totally acceptable.

…Change from an infant car seat to a child’s car seat?

…Not use a car seat anymore?

Children vary widely regarding when they are ready to potty train. Any time between the ages of two and three is normal. There are children who can potty train earlier than the age of two.

…Taken to the dentist for the first time?

Proper oral hygiene should be taught as soon as their first tooth comes in. A trip to the dentist should be taken around the age of two.

…Allowed to use the computer?

In the technology world that we live in, it’s important to teach children computer skills at a very young age. Children as young as two years old can learn to use a mouse and play educational computer software on a computer.

If you have suggestions of other Developmental Milestones that should appear on this web page, please submit them here!

Want to Look Around Some More?...