(Plus, the Really BIG Secret to Feeding a Picky Eater!) 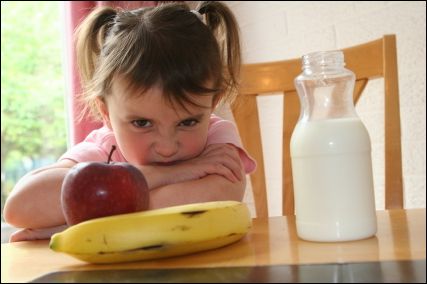 What makes a kid become a picky eater can be one of several different factors. It could be that they are just going through a period of time when the taste of food doesn’t please them. It may be the smell of the food that bothers them. A lot of kids are affected by the different textures of foods. And then there are the kids who are influenced by the role model in their life who does not eat well-balanced meals. And lastly, it could simply be a power struggle because they don’t want anybody telling them what they have to eat and when to eat it.

Regardless of how they’ve become a picky eater, you still have to figure out how to feed them.

The Do’s of Feeding a Picky Eater:

Return to Top of Feeding a Picky Eater

The Don’ts of Feeding a Picky Eater:

Return to Top of Feeding a Picky Eater

The Really BIG Secret to Feeding a Picky Eater:

Now that you’ve read all the basic pointers, let me give you a big secret that works for me when feeding my daycare children.

A couple of weeks later, I tried them again. This time I told them they were Alligator Egg Sandwiches. I explained to them how I went across the street to the swamp that morning and wrestled an alligator so that I could steal his eggs. Then I chopped up the eggs and made them sandwiches. They were so fascinated with the story that they were all willing to give the sandwich a try. Over half of them ate the entire half of sandwich they were served.

Sometimes when I'm feeding a picky eater, I simply change the name of the food. An example of that might be that I’ve changed the name of popcorn shrimp to popcorn fish. I don’t know why, but they eat it that way! And any kind of casserole I serve is noodles. It’s either beef and noodles or chicken and noodles. I think kids just like saying the word noodles.

Want to Look Around Some More?...