If you have a toddler, you know their motto:

What’s Mine is Mine.
and
What’s Yours is Mine. 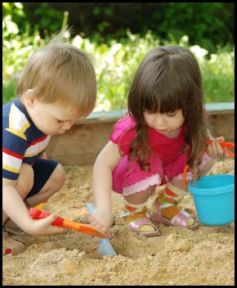 A toddler’s natural instinct is to be selfish. Toddlers sharing is a learned behavior. It’s important to socialize your child so they learn how to share. A child who has no other children to interact with does not learn how to share easily.

If your child has no interaction with other children, then it’s up to you to take on the role as the person they need to learn to share with.

When teaching a child to share, it’s important for you to be a good role model. You can teach a child to share in your everyday life. Easy tasks around the house can be turned into learning experiences for your child.  If you’re vacuuming the kitchen, share the vacuum with them. If you’re baking a cake, share turns putting in ingredients.  Let the child know that you are sharing with them.

If you’re having a difficult time teaching "Toddlers Sharing", sit down and have exaggerated play with them. Make a huge point of sharing your things with them. If they’re willing to share a toy with you, thank them profusely and tell them how proud you are of them.

As a daycare provider, I explain to the children that all the toys they play with are mine. I’m sharing my toys with them so they need to share the toys with the other children.

If you’ve explained everything to your toddler and they still refuse to share, then it would be appropriate to take the toy away and not allow anyone to play with it. There does not have to be any yelling or discipline measures. If they keep losing their toys because they are unwilling to share, they will eventually become willing to share. 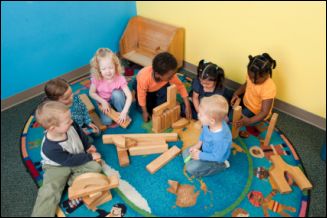 No matter what you try, you’ll still have children struggle with the sharing concept. I had two little boys in my daycare. They were both two years old. They constantly started arguments that included them yelling at each other, "Mine!" "No, mine!" "No, mine!" "No, mine!" Until I told them to stop. It amazed me at the items they would argue about including things like a lego, even though there were a hundred others ones lying on the floor. The ultimate argument between them came one day when one little boy learned his name began with the letter "A".  He said "A" and the other little boy said "No, my A."  And it began, "No, my A." I couldn’t believe they were arguing over the letter "A".


Return to Top of Toddlers Sharing


Want to look around some more?...